Your phone keeps ringing and you have no idea who is at the other end of the line? tellows mellows the time consuming searches for the truth behind an unknown caller. Thanks to the tellows Score you are now able to spot the trustworthiness of the calling number within the blink of an eye.

tellows’ aims to provide a free platform for all those who are looking for information on unknown callers. To achieve this, the focus rests on the special feature called the tellows Score.
Interesting fact: tellows is available in over 50 countries and used by million of people to rate incoming calls! 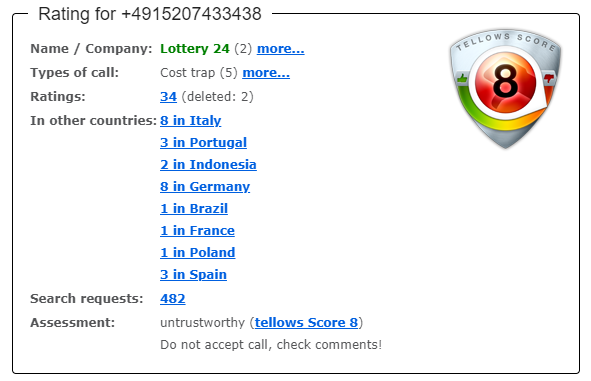 This Score enables your fellow tellows users to rate and categorize each phone number on a scale from 1 (trustworthy) to 9 (dubious). The Score itself is hereby provided by an complex and extensive algorithm that considers various factors and user opinions in order to categorize the nature of the call adequately. Therewith, it allows all tellows users to spot the trustworthiness of the telephonenumber in an heartbeat.

By accessing the tellows website or directly in the iPhone or Android app, you can find out who called, find out where the number is from and read reports from other users. If there is a risk of the call being a trap, you can identify it directly on the screen of your cell phone avoiding discomfort and danger of falling into telephone fraud.

With the tellows app, community comments are integrated into the list of suspicious numbers and, whenever you receive a message from an unknown number, the tellows score will appear on your phone screen.

Tellows also allows the user to register as a member and can create personal block lists and add unwanted numbers that are not yet in the tellows score or that are not a public threat. In this case, even if the number ranking in the ranking is positive due to other evaluations, it will be identified as dangerous when you receive a call. In addition, you can block it even before the phone rings using the premium version of the tellows app.

By logging into the application, all numbers that you have commented negatively on the website or the app itself are imported and immediately transferred to your personal block list, even if the final grade is not between 7 and 9 in the ranking. Your list does not depend on the ratings of other users. The block list can be used on any device where the app is installed, in any tellows product just login.

In addition, as a registered user, your comments cannot be removed without careful review by the tellows team. Before removing it, the team will contact you to clarify any doubts. Registered users are also allowed to edit their comment after posting.

Becoming a member is quick and easy and allows you to try the premium version of the tellows app at no cost for a month. Try it!

What else does tellows have to offer?

Besides the app, try our landline protection and read the tellows magazine!

Tips and Tricks about current scams, practices and protection

Development of scam types and caller distribution around the world

We use cookies to personalise content and ads, to provide social media features and to analyse our traffic. We also share information about your use of our site with our social media, advertising and analytics partners. AcceptFurther Information